I pre-ordered the Steam Controller and Steam Link a while back, they just arrived today. Here’s what’s in the box and my initial impressions. 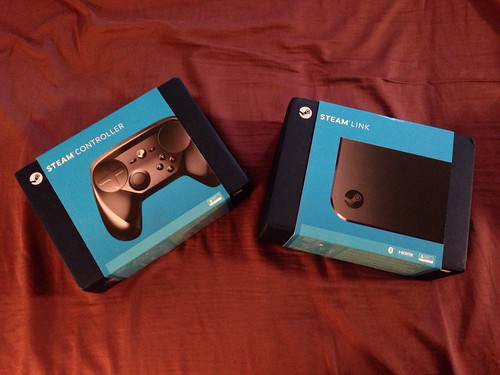 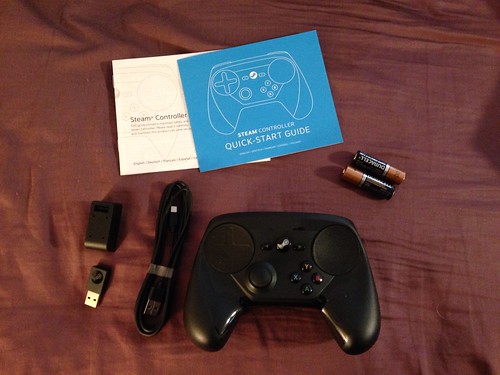 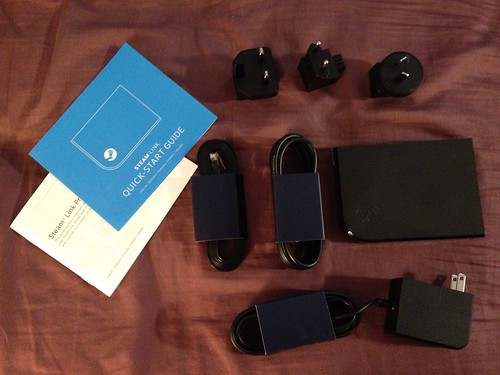 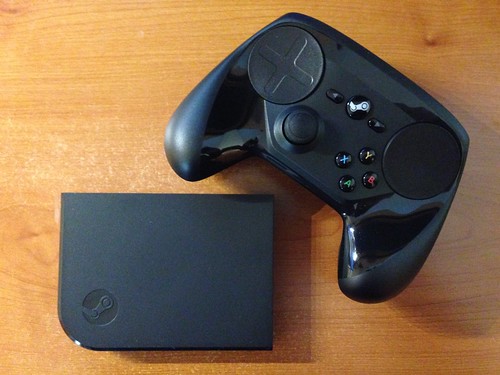 So, how do they work? Pretty well, with some caveats.

The controller feels solid, not too heavy but not light, approximately the same weight as the Xbox360 or PS4 controllers (since that’s what I have, that’s what I’ll compare it to). It’s slightly bigger than either of those, with a lot of surface area. The first thing I noticed was the upward tilt of the upper half of the controller, this makes the trackpad surfaces easier to reach with your thumbs.

Buttons buttons buttons. This thing has a lot of buttons. There are the standard 4 by your right thumb, 4 trigger buttons (2 left, 2 right), and left and right “squeeze” triggers, start/system/select buttons, and trackpad 1, trackpad 2 and thumbstick clicks.

That’s 16 buttons, 2 trackpads and a thumbstick. Plenty of controls to work with.

The L2/R2 triggers don’t have as much play as the Xbox360 or PS4 controllers, not sure if that will cause issues for racing games where analog trigger pressure is important.

L1/R1 triggers feel placed a little high, but feel clicky and responsive. Putting my index fingers on them makes me want to position my thumbs higher, no longer in the center of the trackpads. I haven’t tried this in practice though, so it might be fine.

The left and right “squeeze” triggers, which you can trigger with any fingers not on the L1/L2/R1/R2 triggers, are comfortable and easy to use. I could see mapping these to primary actionsÂ like “use” and “jump”.

X/Y/A/B buttons differ from other controllers. On Xbox360 and PS4, those buttons have primary placement next to your right thumb, with the right thumbstick below that. The Steam controller swaps this, giving the right thumbpad primary placement and the buttons in the secondary spot. This will take some getting used to, every time I went to hit them, the buttons were lower than I expected and requires “reaching” your thumb from the relaxed position of resting on the thumbpad.

Thumbpads – this is where the Steam controller stands apart from others. The PS4 controller does have a small touch area above the thumbsticks, but it’s in a very tertiary spot that would be uncomfortable to use for any length of time, since you have to reach over the thumbsticks to get to it.

The Steam Link is pretty straightforward. You hook it to the TV and ethernet, power it on, and connect it to aÂ computer on the same network that’s running Steam with streaming enabled. Per Valve’s suggestion, I updated that computer to the latest beta of Steam Big Picture so I’d have any Steam Link / Steam Controller patches.

It turned on, though there was aÂ little resolution jitter before showing the “select language screen”. Â Then I selected my computer from the list and Steam Big Picture fired up. Setup was fast and easy.

I only had a short time today (on my lunch break) to try out a few games, so this is just a quick initial test.

Ori and the Blind Forest – this is a pretty platformer, which requires timed jumping. I didn’t experience any controller lag, though it did take some getting used to the button locations. I’m used to Xbox360/PS4 buttons, and the Steam controller’s are lower, so any time I took my thumb off the buttons, I would flounder momentarily or press the wrong button when I went to jump. I expect I’ll get used to this, though. Overall it seemed solid for platforming.

The Talos Principle – this is a first-person puzzle game. It doesn’t require a lot of fast reacting for the most part, so I figured it’d be a good calm place to try out FPS controls. The default control configuration was… not great. The virtual right thumbstick just wasn’t doing it for me. I tried out mouse/keyboard mode, which made the right thumbpad more responsive, but was more absolute positioning instead of relative, so still didn’t feel right. I tried a coupleÂ user-submitted profiles, but they weren’t quite right either. I imagine finding the right mapping for FPS games is going to be a mix of user-submitted profiles as well as in-game control settings. This could be frustrating, only time will tell.

Hearthstone – is both a non-Steam game and a mouse-based game. It worked great! Mousing around felt ok, with the default mapping of left-mouse-click mapped to R2Â and right-mouse-click mapped to the L2.Â ThisÂ sounds backwards but feels normal, since the right trigger is the primary action. I played a quick game (and won) and it felt fine. A little like using a trackball, but acceptable.

Exiting Hearthstone, however, revealed a flaw. I could quit Hearthstone easily enough, but that left me on Battlenet, with no clear way to get back to Steam. Pressing the middle “Steam” system button on the controller didn’t do it, although moving the controller made beeps that sounded like maybe I was on the Steam menus, but still behind Battlenet. Eventually I got back to the Steam menu, but only after a lot of trying. It felt buggy and laggy. Once I was back on Steam Big Picture, everything was fine again. So your milage may vary on non-Steam applications. At some point I’m going to try Dragon Age: Inquisition, which is an Origin game, so we’ll see how that goes…

What was unclear was how to *stop* playing. There’s a “Shutdown Steam Link” option on the menu, but it didn’t seem to do anything. If it *did* shut down the Steam Link, I’m not sure how you’d turn it back on, since there’s no power button on it. The issue with this is the controller is still paired, if I left it going it’d be wasting batteries. I eventually settled on choosing “Disconnect Controller” and then physically unplugged it. It does not seem like the right way to do it, I’ll have to look online and see what you’re supposed to do.

That’s it for my quick first impressions of Steam Link and the Steam Controller. Mostly positive, but on the controller, some qualms about the right thumbpad as virtual thumbstick and the button placement, and on the Link, some issues with exiting non-steam games and how to turn the Link off.