This is a quick review of some dice rolling apps on iOS, specifically ones that let you make custom dice.

For this example, I’m recreating dice from Roll Through the Ages, an excellent dice game from Gryphon Games.  It’s a six-sided die (d6) with images on each side. In each app I will use the same 6 images and background to recreate these dice.

This is a deep program, that offers lots of options.  You can set up dice-rolling equations for the most complex and arcane dice math you could ever need.  However, it has so many features that it’s somewhat confusing to use.  It took reading a tutorial to figure out how to create a custom die. It is also not very stable, especially when creating custom dice.  It took me 10 or so attempts to finally get the dice created (when scaling my images to fit on the die face it would crash). The actual dice rolling works nicely, and has good physics. It requires a couple taps to “hold” a die 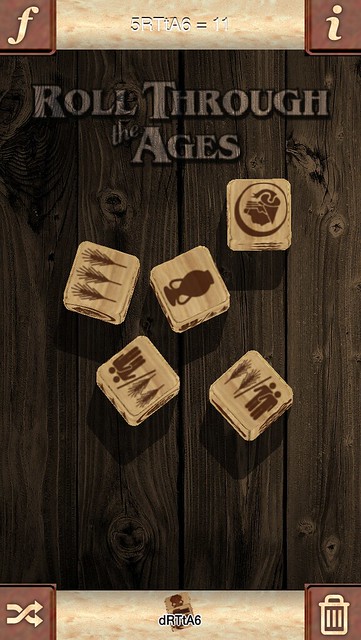 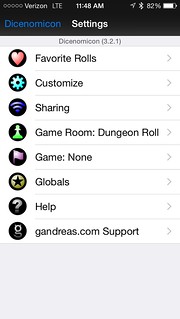 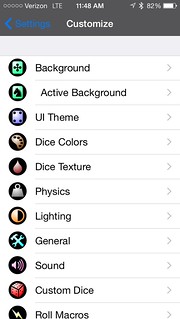 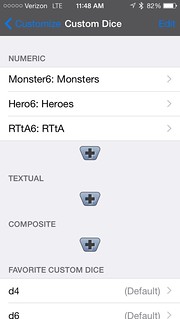 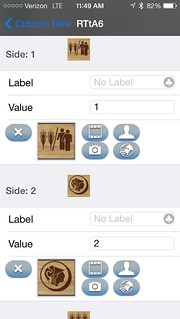 The exact opposite of Dicenomicon is Photo Dice – almost no features, but what it does is very easy to use. Creating a new die (only d6, as opposed to Dicenomicon which can do any number of sides) is a couple taps, and assigning an image to each side is super fast and easy (and no crashes!).  Dice rolling is similar to Dicenomicon, but holding dice and moving them around only requires a single tap, so it’s quicker. 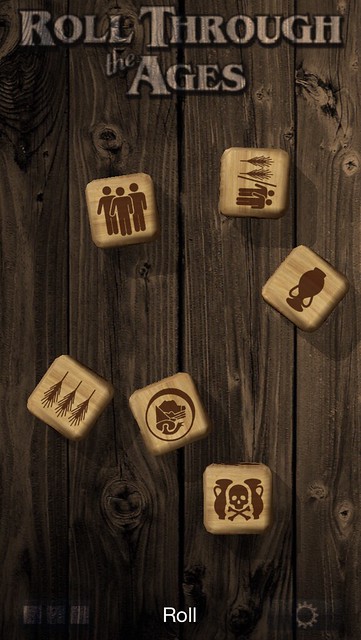 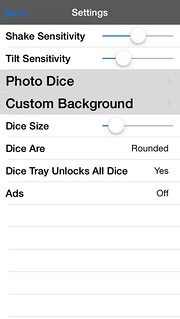 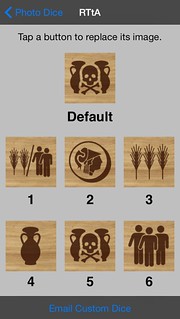 The next step up from Photo Dice is Mach Dice, by the same developer.  It takes the ease of use of Photo Dice and adds the ability to create more than just d6 dice. It also has 5 playfields, so you can set each playfield with a different background image and dice configuration and switch between them.

Mach Dice does have more of a learning curve than Photo Dice, but nowhere near that of Dicenomicon. You create a custom die with a number of square images, then when you add a new die to a playfield, you specify the image set to use for it. The only difficulty here is that all image sets are square images, if you use those images to create anything other than a d6, the images will be mapped on the die face and masked to that shape, so for example a d8 will use a triangular section of the square image you have set.  Knowing exactly where the image will be cropped for any given die requires a lot of trial and error, this could have been made much easier by providing a template for each die face.

The die rolling area is similar to Dicenomicon – unlike Photo Dice, there is some space taken up by a header bar, so plan image placement accordingly for backgrounds.  Dice rolling itself is great, with the same system for holding and moving as Photo Dice. 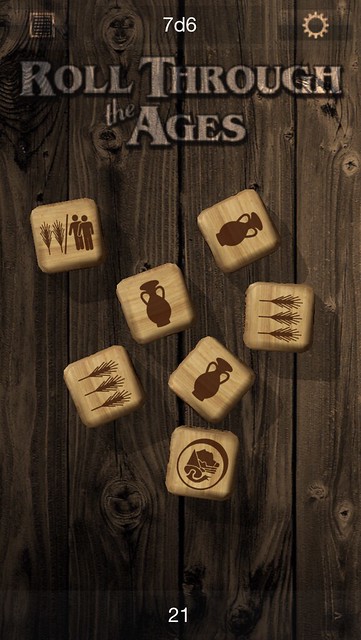 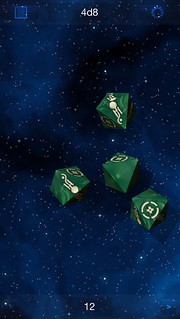 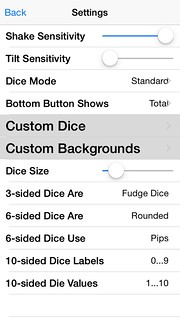 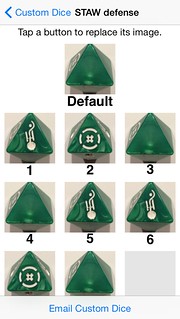 Similar complexity to Mach Dice is Dice Forge.  However, creating custom dice is a multi-step affair that you can’t actually do in the program itself. It will export templates (simple unfolded texture maps) that you then have to edit it Photoshop or your editor of choice, then re-import into Dice Forge. It’s not something you can easily do on the go, so you’re going to need your computer to make new dice. Once you import the texture, you add dice to your dice pool – which is an extra step compared to Dicenomicon or Photo Dice, where you just tap a die to add it directly to the table. The die rolling is lackluster, small dice fly across the screen when you click “roll dice” – rather than using the gyro to allow you to shake the dice like Dicenomicon or Photo Dice, Dice Forge uses a “shake” to simply re-trigger the throw animation, which has nothing to do with how you shake the phone. It makes the dice feel less physical. When you hold dice, instead of anchoring them on the table when you reroll, like the other apps, Dice Forge moves them offscreen to a “held” dice pool, so it’s extra steps if you want to view all the dice after rerolling some. There is also a “flyby” mode where the camera rotates around the table showing your roll. It’s pretty but serves no purpose. Overall, Dice Forge has the least satisfying rolling experience of the three. There’s also no option to change the background image. 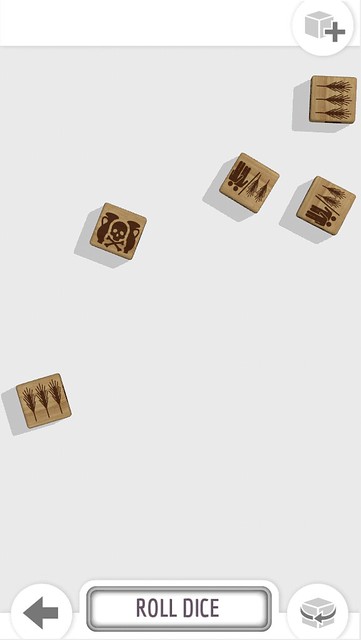 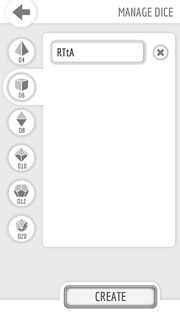 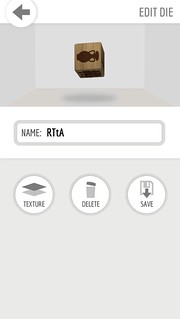 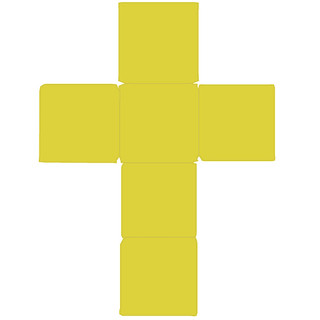 Dicenomicon has all the features you could want, however it has a learning curve and hasn’t been updated in a while and has some annoying bugs.

Photo Dice is basic but fun to use and cheap – if all you want are custom 6-sided dice, this is the app you should get.

Mach Dice keeps the ease of Photo Dice but adds different die types. Not as many features as Dicenomicon, but also easier to use. Making dice other than d6 requires a little trial and error to see where the crops will happen, but overall this is my favorite of these dice apps and the one I’d recommend most.

Dice Forge has the flexibility to make custom dice of any type, but little else.  The dice are tiny and the rolling doesn’t “feel” as good. Overall it feels overpriced at $5.